Yup, the time has come for me to announce (here…we’re late to the game here as it’s been announced elsewhere) that my second book, What It Takes, will be published by Interlude Press on January 14th! I’m guessing that means presale will be happening in November-ish, so start saving your pennies now!! 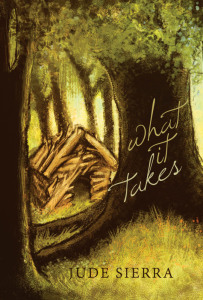 Moments after 8-year-old Milo Graham moves to Cape Cod, he meets Andrew Witherell—launching a lifelong friendship built around a secret fort, and plans for the future.

When Milo is called home from college to attend his domineering father’s funeral, he and Andrew finally act on their mutual attraction. However, both know that it’s not just the past that makes the way ahead complicated. Each wanting what’s best for the other, they sever all ties.

Years later circumstances bring both men home again, and a rekindled friendship brings forward long held feelings will not be denied. But…